What if your career could change your life?

Hear from our Current Nurses and Previous Nursing Students on how their Nursing Career at Mayo Clinic has been life changing! Learn about their Career Path, the variety of opportunities they've encountered, and what makes them say this was a great day.

“Dreamed of being a nurse since I was eight” – a LPN’s long road to making that dream a reality!

My name is Amelia Howell and I am an LPN at the Mayo Family Clinic Northeast.  I have been at Mayo for three months but my journey to get here was a long one.  I had dreamed of being a nurse since I was eight and working for Mayo became a dream shortly after. 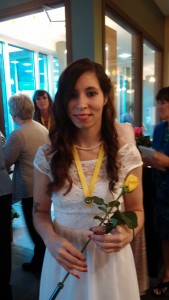 Two family members have battled cancer. One was treated at Mayo in Rochester. One  was not treated at Mayo and  passed away within a year of diagnosis. I always felt the quality of care  received, or rather didn’t receive, made all the difference, thus making Mayo all the more appealing to me.  For me, the best thing about being at Mayo is exactly that. I AM AT MAYO! I have struggled with Cerebral Palsy my whole life and while being a nurse was always my dream, I was often told that it was a foolish dream; eventually I got a push from a very dear friend and went to school.  School was no easy feat and I became very ill during my last few quarters making it seem like I was going to be unsuccessful with my nursing career.  I pressed on though and eventually, I made it to my pinning ceremony and passed my boards.  I had done it, I had become a nurse.

The question now was could I actually make it a career, and then one day I got the call, Mayo was offering me a position. Not only had I succeeded at becoming a nurse when several doctors told me it was an impossibility, I was going to be working for Mayo.  My dream had finally been realized.  When it came time to start, I was nervous to say the least, I began to question my abilities as a nurse, but then something changed, while orientating at my clinic I was constantly working as part of a team, and in an effort to be part of the team and make teamwork successful I began to feel empowered.  I began to have a can do attitude, and realize that I can do this, I have all the skills. Because I felt so empowered I began to volunteer to learn new skills and even to be one of the LPN on a pilot project at our clinic.  While I am a long way from being an expert in my field I have several resources and a great support system to help me grow through my career with Mayo.  More important to me than the benefits or the reputation I get by being a Mayo employee is the knowledge that should I choose to further my nursing career Mayo would support me.  While I have only worked for Mayo a short while it has made a huge impact on my life, not just in my sense of pride and accomplishment, but it has helped me to believe anything is possible.  As for my family, I have never seen my mother more proud. Mayo for her has always meant the difference between life and death, it has always meant quality of care and kind nurses.  I have yet to have a day where I haven’t thought to myself, today is a good day.  I am at Mayo.